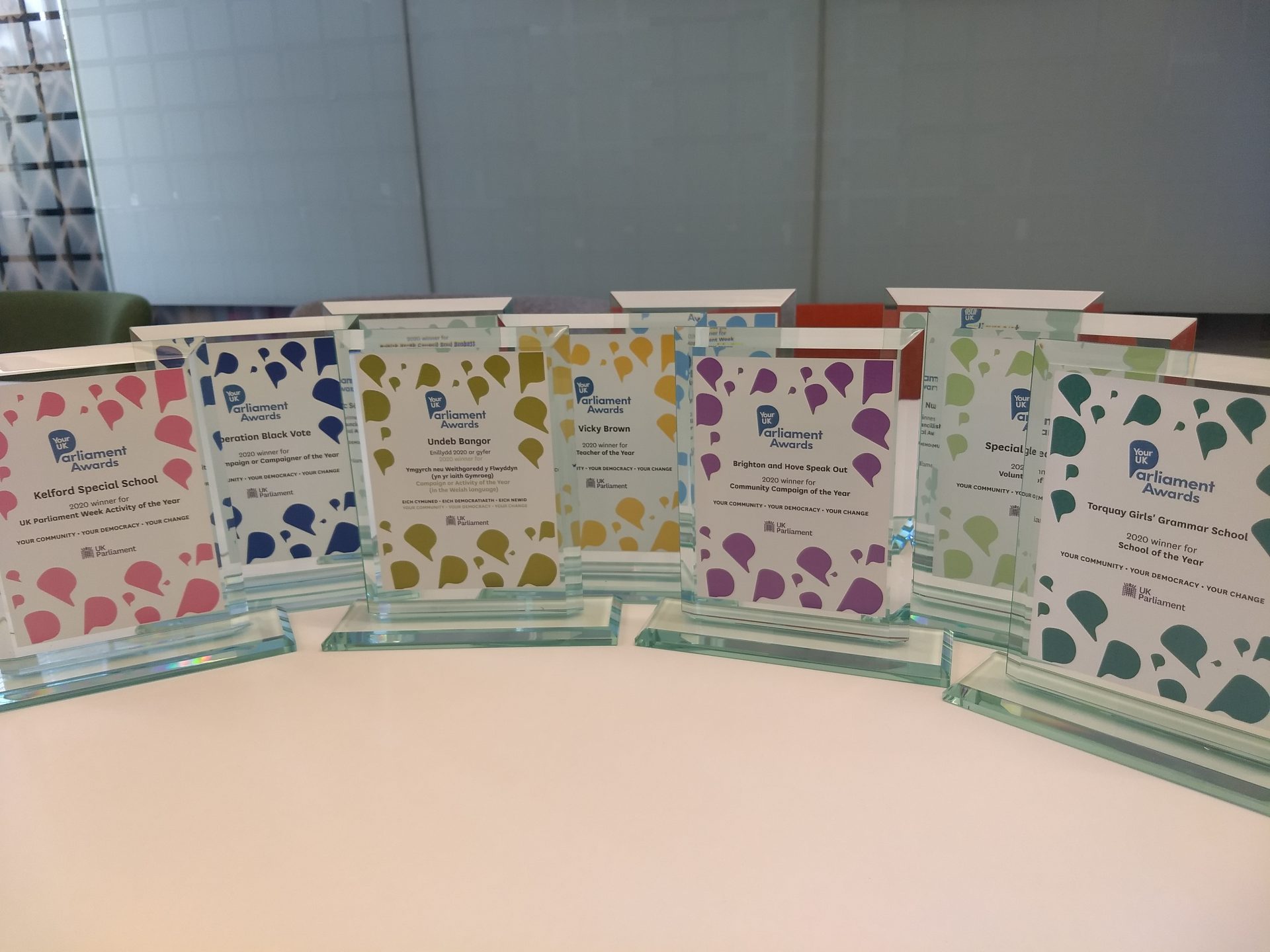 The Your UK Parliament Awards celebrate people across the UK who have taken action on the issues they care about.

2020 marks the third year of the Your UK Parliament awards. The winning entries were chosen by a panel of MPs, Peers and independent judges, who were unanimously impressed by the work people are doing to connect their community with the UK Parliament and democracy.

More about the winners….

Volunteer of the year
Celebrates the amazing work of people who volunteered their time to get others involved with democracy and the UK Parliament.

Special Needs Jungle is a non-profit organisation. Co-directors Tania and Renata, along with a team of volunteers, are dedicated to providing resources and information on navigating the Special Educational Needs and Disability (SEND) system. Due to their work families have information about how to get the help required by children with special needs, and professionals are better informed about what they can do to help.
Special Needs Jungle are keen to reach as many people as possible. They have developed a large and active online community on social media of parents and professionals. They have amplified their influence by getting two other parent led campaign groups to join forces with them and forming a SEND Community Alliance. Before the general election this year, they educated families about what each party manifesto promised for the SEND community to help people make informed decisions when voting. A member of the team also gave evidence to a SEND inquiry hearing in UK Parliament.
As an organisation, Special Needs Jungle are highlighting the problems of the SEND system and finding ways to fix it.

Digital Campaign or Campaigner of the Year
Celebrates the work of those connecting people to democracy through digital engagement.

Operation Black Vote (OBV) exists to ensure there is greater racial justice and equality throughout the UK. They seek to inspire BAME communities to engage with public institutions to address the persistent race inequalities that exist. Their work spans a number of areas including voter registration, lobbying politicians, mentoring schemes and political leadership programmes.
Prior to the recent general election, OBV released a multi-media campaign to encourage UK’s disenfranchised BAME communities to vote. It included quotes from politicians and some prominent artists and activists. They used this media campaign to inform the community, especially the young, that if they did not vote they will not get their voices heard and others will speak for them. This led to increased political awareness and activism in the community.

School of the Year
Recognises schools which have taken action on an issue they care about and engaged with the UK Parliament on it.

The students of Torquay Girls’ Grammar School are passionate about climate change issues. At a school level they have initiated many changes; they started a vegetable garden, got single use plastic banned in the canteen and introduced meat-free Mondays.
As under 18 year olds are unable to vote, they created a forum to influence policy makers instead. They started an e-petition ‘Consult With Focus Groups Of Young People When Creating Climate Change Policy’ to ensure young people had a say on decisions about climate change, and created a video to promote it.
Using their lunchtimes to spread the word, they were able to engage MPs, Peers, Councillors, other schools and community groups in their cause. Anne-Marie Morris MP raised their issue in a debate in UK Parliament and they even received a letter of support from Sir David Attenborough! They are now lobbying leaders to facilitate a Student Climate Conference in the future.

Teacher of the Year
Recognises teachers or educational leaders who have taught their students and colleagues about the UK Parliament in innovative, inspiring and engaging ways.

Vicky Brown is a teacher in Redhill Preparatory School and a UK Parliament Teacher Ambassador. She is keen to prove to children that their opinion matters. She wants them to understand the democratic process and feel empowered to speak up against injustice and fight for what they believe in.
Vicky actively engaged students in a campaign to protect service animals, known as Finn’s Law. Their work was recognised by their MP Stephen Crabb, the Welsh Parliament and Lord German OBE in the House of Lords. When Finn’s Law was passed, they were presented with a copy of the Bill and won an award from the PDSA for their work.
Vicky is keen to dispel the stigma surrounding politics. To achieve this, she delivered training on UK Parliament to staff and a Ted Talk on teaching politics to young children. For children ages 4-11, Vicky created ‘Parliament Month’ in school to explore politics in an age appropriate way.
Through her work the children in the school are passionate about politics and believe that their voice can be heard at the highest level.

Community Campaign of the Year
Celebrates an organisation that has campaigned for change in their community.

UKPW Activity of the year
Recognises the work of those who made an outstanding contribution to UK Parliament Week.

Kelford Special School is an all age school (age 2 to 19) for those with severe and complex needs. The school is passionate about providing the best quality of education and care for all their pupils.

The aim of their UK Parliament Week plan was to engage the whole school in activities promoting democracy and the work of UK Parliament. Teachers were trained to deliver parliamentary and democratic learning through planning cross-curricular activities. Activities included counting votes in maths, writing manifestos in literacy, and learning about the Gunpowder Plot and Suffragette movement in history.

To develop the students’ understanding of how they could have their voice heard, activities each day in that week was chosen through petitions and votes. They also restructured the existing school council to a ‘Pupil Parliament’ to mirror the UK Parliament; elected students were MPs representing class constituents and students with previous school council experience were made Lords.

Teachers promoted learning in very personalised ways to ensure all the children could participate. This made the students feel empowered.

Bangor University Students’ Union (SU) is the voice of the students at Bangor. Their mission is to enrich and enhance the experience of the students.
When the general election was announced, the SU planned to engage with students through newsletters and social media platforms. The message was to register to vote and ensure voter turnout. First, they set up an online poll to find out which issues were important to the students. They passed the results to the local MP candidates and asked them for a response to the topics to collate into an online leaflet. The SU also hosted a General Election Question Time debate which was live streamed on social media. On election day they employed students to go out and encourage others to vote.
This campaign successfully engaged students and empowered them to register and vote.

Hindu Swayamsevak Sangh UK (HSS) was established by Hindus who immigrated to the UK.
HSS became a UK Parliament Week (UKPW) Official Partner to ensure their community understand why it is important to engage with UK Parliament and democracy. They designated a person, Dr Harsha Jani, to co-ordinate and lead on the UKPW activities.
With 112 chapters spread across the UK, Dr Harsha set up Q&A sessions via conference calls to promote the importance of UKPW. She set up regional WhatsApp groups to manage communications. She directly worked with all regional leads and youths who were responsible for managing the UKPW activities.
HSS used their website, newsletters and social media to promote UKPW and celebrate the activities held during that week. Their efforts were even reported in the Indian print and online news channels! They received support from various MPs, Peers and local council members.
During UKPW 2019, children as young as six and people as old as eighty-two participated in the activities. HSS are proud to reach out to people in the community and help them realise the importance of engaging with UK Parliament. They are looking forward to continued partnership in 2020.

The Cup is awarded to two Members of Youth Parliament (MYPs) for their speeches during the 2019 House of Commons sitting.
Cormac Savage MYP from South Down in Northern Ireland got the award for best debate-lead speech. Cormac’s articulate and passionate summation of the debate on protecting the environment and young peoples’ futures resounded with all in the Chamber. It was voted best front bench speech by the BYC youth workers in attendance.
Lylian Nunoo MYP for East Sussex in the South East, was recognised as the best back bench speaker of the day. Lylian stood and delivered a moving and personal speech on ending knife crime that brought this issue into everyone’s hearts.
Both awards recognise the excellent contributions to the debates and the UK Youth Parliament’s campaigns.